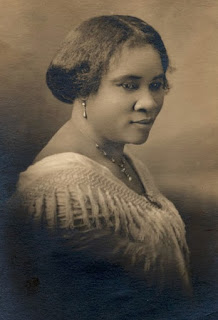 Madam C.J. Walker went from being an orphan at the age of seven to being the first self-made female millionaire. She was one of the wealthiest African American women of her time and used her wealth and power to make change for women and the black community.

She was born Sarah Breedlove in 1867. She was the first child in her family born into freedom. Her parents and older siblings had been plantation slaves before the Emancipation Proclamation. After losing both of her parents by the age of seven, Sarah moved to Vicksburg, Mississippi. By age ten she began working as a domestic. During this time she lived with her older sister and her sister's husband.

In 1882, when she was only 14-year-old, Sarah married Moses McWilliams. It is suspected that Sarah did this to escape an abusive situation living with her brother-in-law. Their daughter was born in 1885. Moses died in 1887, and Sarah moved her and her daughter to Saint Louis. There she found work doing laundry to support herself and her daughter. She married again, but left her husband in 1903 and moved to Denver.

Due to poor working and living conditions, Sarah developed a scalp condition and began to lose her hair. She learned about hair care and started working as a salesperson for a company that would soon become her rival. During this time, she started to experiment with the cleaning products she used for laundry work to see if she could create some sort of tonic for her hair loss. Ultimately, she made something that worked beautifully. She marketed it as a hair regrowth tonic, but it really worked to heal her damaged scalp so her hair could grow healthily once again.

In 1906, she married Charles Joseph Walker and became known as Madam C.J. Walker. She became an independent hair care professional and started going door to door to give women hair treatments and teach them about proper hair care. She started bottling and selling her product, and it took off. Soon, Sarah put her daughter in charge of the mail order business and set up a new headquarters in Indianapolis. To expand even further, Sarah trained a team of saleswomen to sell her hair treatments door to door the same way she had at the beginning.

Not only did Sarah create a great business model, she understood the need for targeted advertising and found ways to reach new customers with newspaper and magazine ads. She also cultivated a strong brand awareness with branded packaging and well-trained saleswomen. By 1920, Sarah's products were sold outside of the United States in places like Cuba and Jamaica.

Sarah also knew how to manage her money, and passed that along to her employees and independent representatives. She provided training about personal grooming, budgeting and becoming financially independent. This lead to the creation of the National Beauty Culturists and Benevolent Association of Madam C. J. Walker Agents, which had annual conventions to train and inspire the women selling her products. The first conference, held in 1917, hosted 200 attendees and is thought to be the first national meeting of female entrepreneurs.

As Sarah's wealth grew, so did her desire to give back. She became involved in the NAACP, gave to scholarship funds for African American students, funded community services in black communities and toured regularly speaking about her success and speaking out against racism.

Sarah passed away in 1919 but left behind a legacy of empowerment and change. She started from nothing and became one of the wealthiest women of her era. She shared her wealth and created change by giving women and African Americans better opportunities and resources. Her legacy and brand continue today.