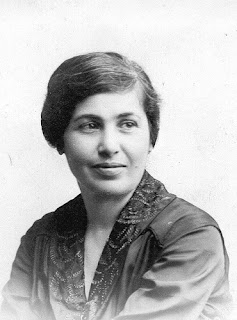 In 1915, the Ottoman Young Turk government rounded up Armenian intellectuals. Some were deported, some escaped, some were relocated, some were killed, some were sent to detention centers. The list of people rounded up included leaders, scholars, journalists, physicians, clergy and teachers. Only one woman was named among them: Zabel Yesayan.

Zabel was born in Constantinople in 1878. In 1895*, she moved to Paris to study at the Sorbonne. While there, she made two major life decisions: to be a writer and to marry Dickran Yesayan. During her time in Paris, she also wrote her first novel, The Waiting Room.

In 1902*, Zabel returned to Turkey. She balked at the only acceptable role for literary women, teaching, and chose instead to work as a writer. This was not considered an acceptable role for women at this time, but she did it anyway. She wrote for women's publications and continued to pen essays and novels. She also caused quite a stir by publishing Phoney Geniuses, which took a satirical look at the Armenian writing community.

Zabel achieved prominence in the Armenian community in Turkey. She fought for women's education and rights. Many Armenian leaders found her too forward-thinking and disagreed with her radical ideas. It's unclear if the Turkish government read Zabel's work or just know of her influence in the community, but she was one of the intellectuals targeted in that first raid on April 24, 1915. She escaped capture by going into hiding in the city before sneaking out of the country under a false name. After escaping, she traveled throughout that region documenting the events of the Armenian Genocide and taking testimonies from survivors. She served as a spokesperson for the plight of her people and wrote about it extensively.

After her husband died in 1922, Zabel settled with her daughters in Paris and continued to write. By 1933, she had decided to relocate to Soviet Armenia, which was the newly formed state for the Armenian people. She continued to write and became a lecturer at the Yerevan State University. Her outspoken nature, once again, landed Zabel at odds with the men in charge. Stalin's officers hounded her for her radical opinions and political views. In the late 1930s, she was arrested as a public enemy. Her official death records state she died in 1937, but her daughter has uncovered evidence that she lived much longer than that in various prisons. According to secondhand reports, it's possible that Zabel drowned in 1943 in Siberia.

Though Zabel's life was marked by tragedy and difficulty, she continued her life's work of writing. She wrote both nonficion and fiction, not hesitating to tell fictional stories packed with just as much truth as her journalist reports of what was going on in her world. She advocated for women's rights and Armenian rights to such an extent she found herself challenging Armenian leadership, Turkish leadership and Soviet leadership. She lived boldly, and never let threat of arrest or harm stop her from writing the truth.

Recently, Zabel has seen a revival. Several organizations have sought to translate and republish her work. A documentary was even made about her a few years ago. A new generation will have the work of Zabel Yesayen to learn about the Genocide, the writing and art of Amernians and the perseverance of an amazing woman.