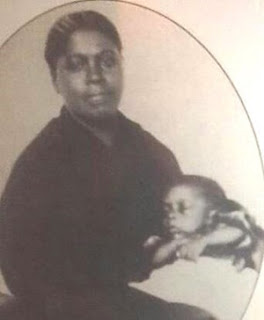 Henrietta Smith Bowers Duterte was a noted philathropist and the first woman and first black woman to own a funeral home in America.

Henrietta was born in 1817 to an affluent free black family in Philadelphia. Known in the community for her fashion sense, Henrietta became a tailor, a successful one. She made cloaks, capes and coats for the middle and upper classes.

In 1852, at the age of 35, Henrietta married Francis A. Duterte who owned a funeral parlor. The couple had several children, but none of them live past infancy. Henrietta's family life was not to be a happy one. After only six years of marriage, her husband passed away in 1858.

Despite her personal tragedy, Henrietta carried on. She took over her husband's funeral parlor and put her name on it. She became the first woman and first black woman to own an operate a funeral parlor. She quickly made a name for herself as a compassionate and swift undertaker who served both the black and white communities. Her business as a funeral director was profitable just as her tailoring business had been.

In addition to offering dignity in death to everyone in her community, Henrietta fought to give dignity in life as well. She was an abolitionist and part of the underground railroad. She smuggled slaves to safety by hiding them in coffins and disguising them as members of funeral processions.

Henrietta's philanthropy reached even further. She supported several charities in her community. She gave money to her local church. She supported the Philadelphia Home for Aged and Infirmed Colored Persons. She also helped support and start the 1866 Freedman’s Aid Society Fair, which offered aid to former slaves in Tennessee.

Though she eventually gave her business to her nephew, some accounts say she worked there until two days prior to her death in 1903 at the age of 86. She served her community until the very end as well. She never ceased her philanthropy or support for causes she cared about. She also opened many doors for women both black and white to operate their own businesses.

Henrietta never took a conventional route. She married late after running her own business and when her husband passed, she not only took over his business but switched it to her name. She grew that business and used that prosperity to help others.